Most folks know the power of positivity and optimism, and how they can be a great asset to your work – The benefits tend to get talked about a lot, and are a familiar discussion point.  On the other side of that coin, though, is the damaging and potent draining effect of negativity.  It is very easy to simply dismiss negative thoughts under the misguided belief that they will not be noticed, or will not impact the things that you do.  Negatives are things that we don’t want to happen and often it is all too easy to formulate excuses to ignore them instead of meeting the problem head on and dealing with it. 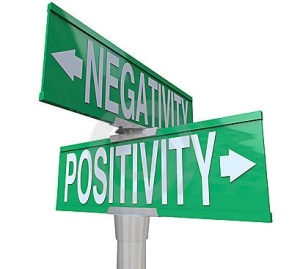 This easy dismissal can make it hard for us to see the impact that negativity has on ourselves.  Indicators can be very subtle – just like some of the body language items you want to take advantage of as touched on in the discussion about putting your client at ease – but they will exhibit themselves, and most likely in multiple areas.  Slight shoulder slumping, a weaker handshake, smaller attention span, the tonality in your voice, and even down to your breathing patterns (sighs or deeper breaths) are just a few of the potential indicators.  While these items may appear to be small and unnoticeable things, bear in mind that a client who does not know you well will be hyper-sensitive to such slight indicators and perceive them.  Think of it as a storm hovering around you.  Even if that storm isn’t directly upon you and pouring down rain, thunder, and lightning yet, there is still that feeling that it is approaching and about to break.  The drain of negativity on your demeanor acts in the same manner to those around you.

Consider this:  The average person takes all of five seconds to make their initial judgment of us via a first impression, and in this line of work there are an awful lot of those!  It is a valuable asset to you to be able to make those impressions as best you can.  Adding hurdles to the process of developing a policy is a step backwards and one that you should strive to avoid.

Certainly negative things can happen and are a normal part of dealing with life.  The important thing is to acknowledge the issue and not try and sweep it under the rug.  Doing so has a positive effect on your mind and body such that they aren’t constantly trying to remind you of this item that is causing you stress.  The result is that you will be able to regain your usual positive mindset and eventually address the issue rather than just attempt to mask the negative symptoms.